Google doesn’t mention this in the tech specs for the Google Nexus 7, but there are magnets built into the tablet, just below the screen. They work much like the magnets in Apple’s iPad, allowing you to attach a magnetic cover to the tablet and hold it in place — and allowing the screen to automatically spring to life the instant you remove a magnetic cover.

Right now there are no cases or covers for the Nexus 7 designed to take advantage of those magnets — but you can build your own for less than $10. 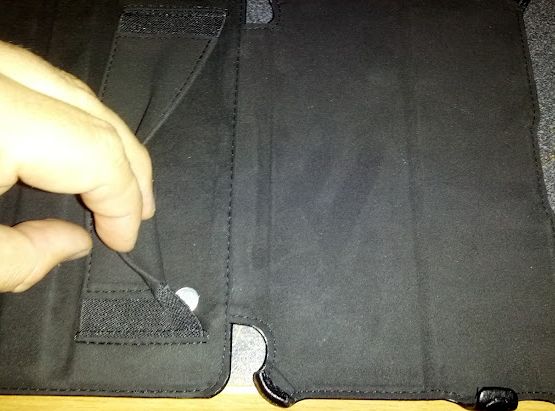 All you need is a magnet and a cheap case that you can tape, glue, or sew that magnet into. The YooMee Kindle Fire case is a good choice, because it’s about the right size for a Nexus 7, and because it has a hand-strap that lets you hold the tablet in one hand while you’re reading.

That hand strap also hangs out just above the magnets in the screen when you’re reading, which means that if you attach a magnet to the strap, it will be in the perfect position to interact with the Nexus 7.

When you open the lid of your DIY smart case, the screen on the tablet should turn on.

You can pick up a red YouMee Kindle Fire case for $5.99

, but it’s not expected to ship until August 2nd.

As for the magnet, if you’ve got any small magnets hanging out on your refrigerator, they should do the trick. You want to make sure the magnet isn’t too strong though — or when you fold the cover over the back of the tablet, it could turn the screen off.