Adobe’s Flash Player isn’t officially supported in the newest Android version, 4.1 Jelly Bean. Though the default browser for the Nexus 7 and other Jelly Bean devices is now Chrome, which has built-in Flash support in the desktop versions, this does not apply to mobile devices.

Adobe warned that attempts to install Flash on Jelly Bean devices wouldn’t work, but it looks like the folks at XDA developers found a way to do just that. 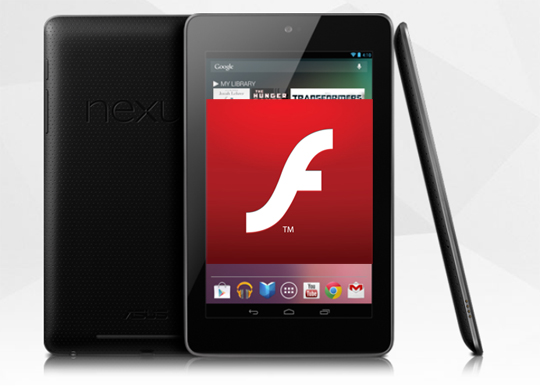 On devices that upgraded to Jelly Bean, such as the Galaxy Nexus, the stock “Browser” app still exists. Users can sideload the Flash APK and enable it via the browser’s settings, then enjoy surfing and viewing media as before.

Devices that come with Jelly Bean pre-installed — Like the Nexus 7 — no longer have the Browser app, just Chrome. And mobile Chrome won’t hook up with Flash even if it’s installed. No problem, because there’s a way to install the Browser app from previous Android versions. That, coupled with sideloading Flash, will get you back to normal. Other browser apps that support plugins should also work.

Since Flash isn’t supported on 4.1 there might be some stability and speed issues. But this is a decent stop-gap measure until the entire web gets HTML5-ified.

Go to XDA Developers for a detailed how-to and APK downloads.

If you already have a browser that supports the Flash plugin, all you need to do is use Paul O’Brien’s Flash Downloader to grab the latest Flash Player APK directly from Adobe’s servers ad install it on your device.