The folks at iFixit provide instructions and tools for repairing your own consumer electronics devices. But over the past few years they’ve earned a reputation for posting detailed tear-down guides of the latest tech. Today’s entry? The Google Nexus 7 tablet.

Now we also know the brand and model number for each of those components and more. 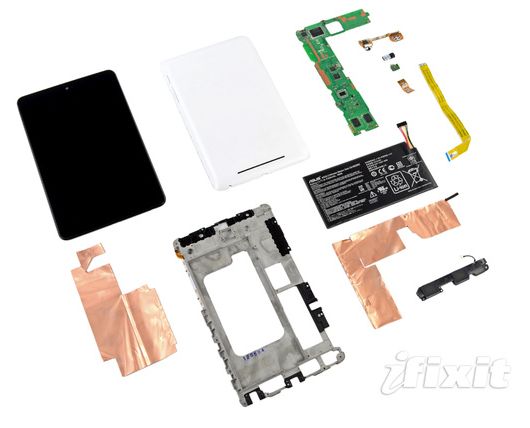 The iFixit guide shows how to disassemble the Nexus 7 case, provides close-up photos of components, and provides us a few extra details.

For instance, now we know the battery is a 16Whr, 4326 mAh battery. The tablet has two microphones. And it uses the same type of RAM found in the MacBook Pro with Retina Display.

On a scale of 1 to 10, iFixit gives the Nexus 7 a score of 7 because it’s easy to disassemble and uses standard sized screws and other components. But because the display is fused to Corning’s scratch-resistant glass, it’s more expensive to replace a cracked screen than it would be on some devices.

The software is also pretty simple to hack, which helps future-proof the Nexus 7. Even if Google decides to drop support for the tablet in a year or two by failing to offer software upgrades, I suspect the independent developer community will help keep the $199 tablet alive indefinitely. Google doesn’t offer Android 4.0 software for its original developer phone, the Nexus One. But third party developers have been building custom Android 4.0 firmware for that phone for ages.