The folks at Google aren’t the only ones working on head-mounted computers that can do some science-fiction level stuff. A guy named William Powell has been working on his own Project Glass-inspired systems, and this week he unveiled a prototype that can translate speech in real-time.

In other words, you can hold a conversation with someone who speaks a different language than you, and the translation will show up in front of your eyes. 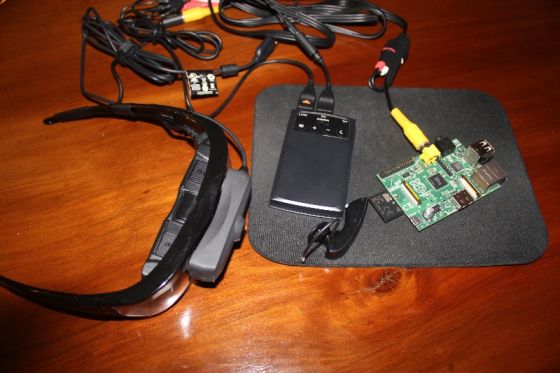 What’s really cool about Powell’s system is that it’s hobbled together from a series of existing products, including Vuzix 1200 Star video glasses, and a Raspberry Pi mini-computer.

He’s also using a bluetooth Mic hooked up to an iPad or smartphone, Microsoft translation APIs and some other tools.

The whole thing isn’t exactly a portable as Google’s Project Glass, which you can wear like a pair of glasses with no extra cables or palm-sized computers to lug around. And while the Raspberry Pi is cheap, at about $35, the full kit is rather pricey once you add in the $4999 Vuzix glasses and other components.

But still… did you watch that video? It’s a real-time (or nearly real-time) translation tool that lets you hold a conversation with someone speaking a language you wouldn’t otherwise understand. That’s a pretty cool demonstration of today’s technology doing something I kind of thought was still years away.