Microsoft is introducing the next version of its operating system for smartphones today — and one of the key features of Windows Phone 8 is that it will share a common core with Windows 8 when the two operating systems ship this fall.

That means Windows 8 desktop, notebook and tablet computers and Windows Phone 8 smartphones will have a shared kernel, shared hardware drivers for networking, graphics, and multimedia, and additional shared features. 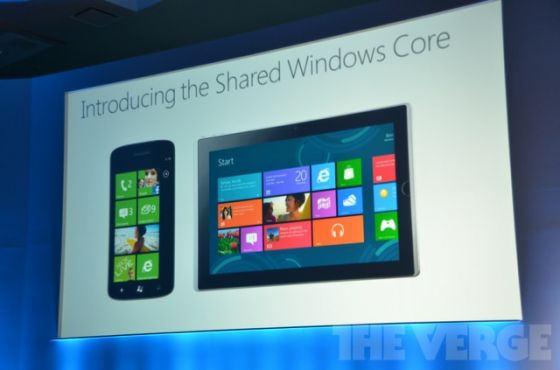 Among other things, by bringing the mobile and desktop operating systems closer together, Microsoft is going to make it easier for developers to create apps that can run across both types of device.

Windows Phone 8 also adds a number of new features, including support for a wider range of hardware including devices with multi-core chips, removable microSD cards, and higher resolution displays including 1280 x 720 and 1280 x 768 pixel screens.

Microsoft is also bringing Nokia’s map software with turn-by-turn directions to the OS, introducing a new Wallet app for secure payments on devices with NFC, and adding more customization options for personalizing your phone’s start screen.

Overall Windows Phone 8 seems like a decent upgrade for Microsoft’s mobile operating system — but it’s an upgrade that current owners of Windows Phone 7.5 devices won’t get. No current phones will be able to run Windows Phone 8. Instead Microsoft will offer a Windows Phone 7.8 upgrade which will bring just some of the new features, including the new customizable start screen, to existing handsets.

11 replies on “Windows 8, Windows Phone 8 to have same core software”