Vizio has introduced a new set-top-box that brings internet video, apps, and games to a TV. The Vizio Co-Star is a $99.99 device that you can connect to your TV or hook up to an existing cable or satellite box, letting you access live TV as well as apps or web content.

The device is powered by the latest Google TV software, which hasn’t been widely successful to date. But the first Google TV boxes from Sony and Logitech had prices closer to $300. With a price that’s three times lower, the Vizio Co-Star could be an interesting alternative to a Roku, Apple TV, or Boxee Box.

The Co-Star will be available in July, and it’s already available for pre-order from Vizo’s website. 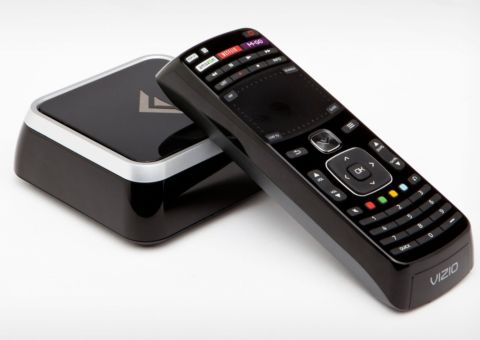 As a Google TV device the box can run a number of apps including YouTube, Netflix, and Amazon Instant Video. Vizio says the Co-Star is also the first media streaming device to include support for OnLive, a service that lets you stream PC and console video games over the internet.

In other words, you can play Xbox or PS3 games by connecting a USB or wireless joystick to the Co-Star. OnLive offers free trials of some games, but you’ll have to either pay for a subscription or pay for access to individual games if you want to play a title from start to finish.

Aside from high prices, some of the early Google TV devices suffered from a lack of available content. On paper, Google TV and Co-Star appear to have overcome both problems. When the device actually starts shipping next month I suppose we’ll find out whether Google’s TV software is really ready for prime time yet.

Sony is also introducing its next-generation Google TV box, the Sony NSZ-GS7. Priced at $200 it appears to be a lot like the cheaper Vizio Co-Star, but it has 2 USB ports and a remote control with a QWERTY keyboard built into the back.

6 replies on “Vizio Co-Star brings Google TV, OnLive gaming to any HDTV for $100”