Most convertible tablet-style laptops have one screen. When it’s facing the keyboard you can use the device like a laptop. But you can also rotate the display to face away from the keyboard and close the lid to use the computer like a tablet.

Then there’s the SeedTronic Seedbook. This laptop has two displays, one on the front of the lid, and a second on the back. So all you have to do is open the lid to use the computer like a laptop or close it to switch screens and use the device in tablet mode. 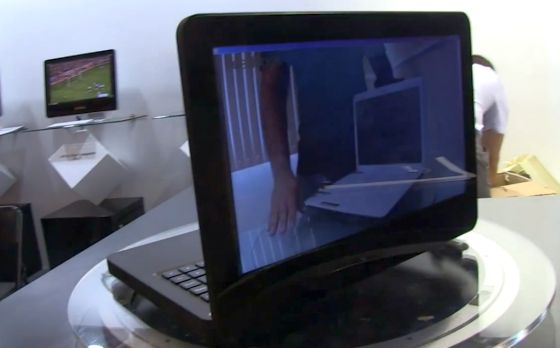 SeedTronic isn’t the only company working on this type of laptop design. Asus showed off a similar prototype called the TAICHI recently. But this type of dual-screen convertible is still the exception rather than the rule.

Netbook News got a chance to check out a Seedbook prototype at Computex last week, and reports the front will have a standard LED display, while the the rear-facing screen will be an OLED display featuring a touch panel with support for 5-point multitouch.

The prototype is a little boxy, but SeedTronic plans to make the laptop a little thinner and lighter before the Seedbook is released.

The computer has 4 USB 2.0 ports, VGA and HDMI ports, mic and headphone jacks, a card reader, and Ethernet port.

SeedTronic has offices in Hong Kong and Brazil… so I don’t expect to see the Seedbook in the US anytime soon.