Samsung is showing off an upcoming ultrabook with a 14 inch display at the Computex trade show this week. It can also function as a tablet. There’s nothing surprising about that… it seems to be true of many of the Windows 8 notebooks we’re seeing from Computex this year.

But what makes the Samsung Series 5 Ultra Convertible special is the way it transforms from notebook to tablet mode. Instead of twisting the screen sideways, engaging some sort of slider mechanism, or detaching the keyboard, you just open the lid… and then keep opening it.

The display goes back 180 degrees until it’s resting on top of the back of the laptop. 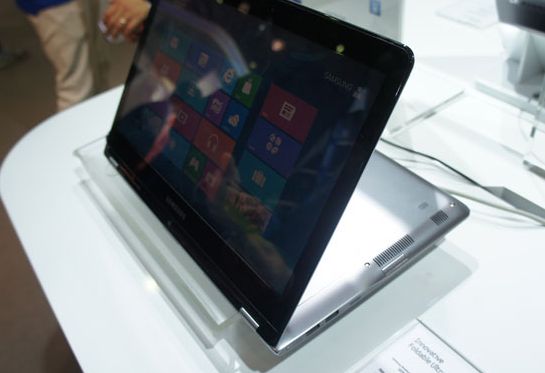 This isn’t the first time we’ve seen this sort of design. The Lenovo IdeaPad Yoga display also rotates 180 degrees to transform the notebook into a tablet. But for now, these two devices are the exception, not the rule. This isn’t the kind of design you see very often.

Maybe that’s because it leaves the keyboard exposed, so that even if the keys are disabled, the tablet could be less comfortable to hold than one with a smooth back.

It has a 14 inch, 1366 x 768 pixel display. The prototype also has an access panel on the bottom of the laptop that would let you access the hard drive and memory — something you don’t often see on an ultrabook. But it’s not clear if the final version will still have that access panel if and when the Series 5 Ultra Convertible hits the market later this year.

Samsung is also showing off a Series 5 Hybrid tablet with a detachable keyboard and the Samsung Series 5 Touch, an ultrabook which has a touchscreen, but no tablet mode.