So the good news is that Apple is starting to offer laptops with “retina” displays, meaning there are so many pixels on the screen that you won’t be able to see them when the computer is an arm’s length away from your eyes.

The bad news is that retina displays don’t come cheap. The first laptop from Apple with 220 pixels per inch will be the next-generation MacBook Pro, a 15 inch laptop with a starting price of $2199. 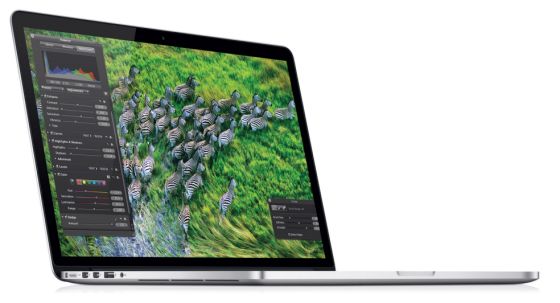 That high price isn’t just for the display. The new MacBook Pro also has a 2.3 GHz Intel Core i7 quad-core processor, NVIDIA GeForce GT650M graphics, 8GB of RAM, a 256GB solid state disk, and a case that measures just 0.71 inches thick and weighs under 4.5 pounds. The laptop also gets about 7 hours of battery life.

Apple also unveiled new MacBook Air models today, with prices starting at $999. But the company isn’t offering high-resolution displays on those models… yet.

The only other “laptop” I’m aware of that’s had a pixel density as high as the new MacBook Pro is the Sony Vaio P — which had an 8 inch, 1600 x 768 pixel (221ppi) widescreen display. But that little computer was more of a palmtop than a laptop and it had a sluggish Intel Atom processor.

But if Intel is right, the MacBook Pro is just the beginning. The chip-maker recently predicted that we’ll see tablet, phone, notebook, and desktop displays with higher pixel densities in the next year or so.

thanks to Boing Boing for reminding me about the Vaio P