Mozilla has launched an early version of an app store for web-based apps. It’s called Mozilla Marketplace, and it’s designed to be a place where you can find web-based software that you can install on a Windows, Mac, or Linux machine just as if you were installing a desktop app.

Right now there are fewer than 200 apps available and you’ll need to install the latest Firefox 16 Nightly build in order to try the Marketplace. But the apps I’ve tried out have all worked as delivered, and there are a few names you might recognize including Evernote, Springpad, Jolicloud, and Lord of Ultima. 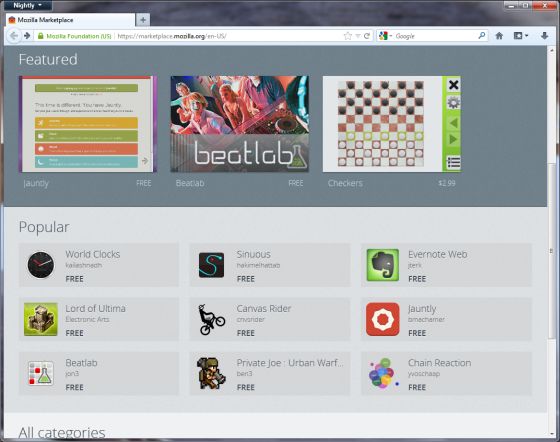 When you install a Marketplace app on a Windows computer, for instance, it shows up in your list of installed programs. You can launch the utility or game directly from the Start Menu. And you can use the Windows uninstaller to remove the app from your PC.

Apps open in standalone Firefox browser windows. While you’re basically just using Firefox to open a website, the apps look more like native desktop apps because they don’t have all the Firefox menus around the edges.

via Hacker News and Browsomatic