The Raspberry Pi isn’t the only mini computer that you can turn into a cheap laptop by connecting a Motorola Lapdock. Motorola’s laptop docking station may have been designed for select Android smartphones, but with the proper adapters you can also use the Lapdock as a keyboard, touchpad, display, and power supply for the MK802 $74 Mini PC.

Andy Kirby from the Rikomagic forums picked up a cheap Lapdock and a few cables and adapters and managed to hook up an MK802 to the laptop shell with minimal fuss. 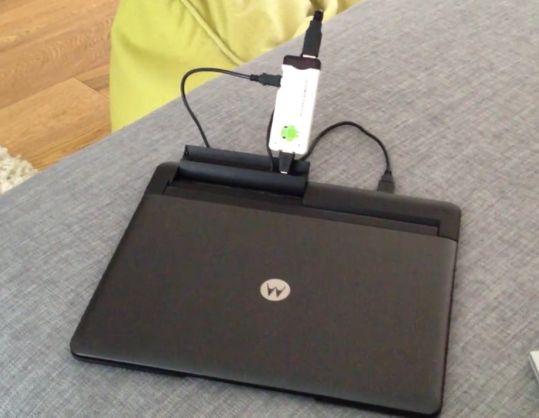 The MK802 features an Allwinner A10 ARM Cortex-A8 processor, 512MB to 1GB of RAM, 4GB of storage, and a microSDHC card slot. It has mini HDMI and mini USB ports, as well as a full-sized USB port.

Out of the box, the little computer runs Google Android 4.0, and it looks like Google’s mobile operating system runs pretty well on the Lapdock. That’s not surprising, since it was designed to work with Android phones.

But Kirby also put together a second video showing the MK802 laptop running Ubuntu 12.04, and it looks like that works just as well.

Both operating systems are actually running on the MK802 PC on a stick. The Lapdock doesn’t have its own memory, storage or processor. In some ways, it’s just acting like any external display, monitor, or keyboard.

I picked up my MK802 for $74 from AliExpress, although a number of different retailers are now offering similar models for similar prices.

The Motorola Lapdock originally sold for $150, but you can pick one up from Amazon or eBay for $77 or less.

In other words, for about $150, plus the cost of cables, you can build an Android or Linux notebook with WiFi and a 1366 x 768 pixel display. You can also disconnect the MK802 at any time and hook it up to a TV or monitor to use the little computer as a desktop — although you’ll have to reboot it to do that, since it has no battery and can’t hold a charge (It also doesn’t have a power button, so the only way to turn it off is to unplug it).

We also have more details about running Ubuntu Linux or Puppy Linux on the MK802.