The Toshiba Portege Z830/Z835 was one of the first ultrabooks to hit the streets, and Toshiba says it’s still one of the best selling. But now the company is launching an updated number… The Portege Z930/Z935. 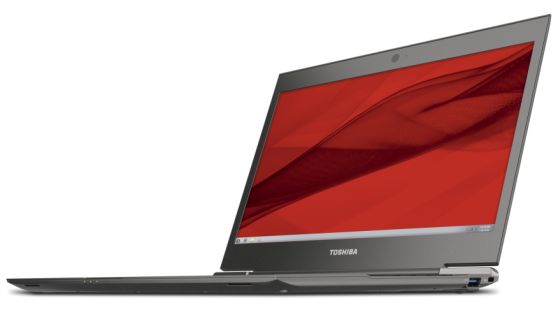 On the outside the new 13.3 inch ultrabook looks almost exactly like Toshiba’s first ultrabook. it has the same magnesium case, the same thin and light profile, and the same backlit keyboard.

The company also reinforced the screen. Early users had complained that there was too much flex in the display, so Toshiba toughened up the LCD.

If you’re wondering why there are two different model numbers, it’s because the Toshiba Portege Z930 is aimed at business and the Z935 is a consumer model. But they’re both pretty much the same laptop.

Both measure 0.63 inches thick and weigh about 2.5 pounds. Both feature 1 USB 3.0 port and 2 USB 2.0 ports, HDMI and Ethernet jacks, and memory card readers. And both come with built-in 8 cell, 47Whr batteries that Toshiba says provide more than 8 hours of battery life.

Toshiba also included a feature that lets you connect a phone or other device via a USB cable to charge the device even when the computer is asleep. Another thing you can do while the PC is sleeping is listen to music.

For the starting price you’ll get a model with an Intel Core i3 processor and 128GB solid state disk. Toshiba will also offer Core i5 and Core i7 options, as well as an optional 256GB SSD.