It’s kind of Google’s answer to the Apple TV: A device that lets you stream music, movies, and other content from the Google Play Store to a TV. But it’s also much more than that… which helps explain the $299 price tag for the Nexus Q. 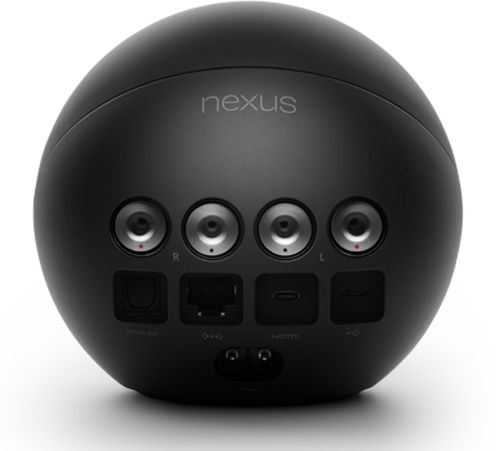 Google’s device is a black sphere with a 4.6 inch diameter that looks a bit like a Magic 8 Ball with 32 RGP LED lights around the perimiter.

On the back you’ll find a number of ports including micro HDMI, micro USB, Ethernet, S/PDIF, and speaker outputs. The Nexus Q includes a 25W amplifier for external speakers.

The media device runs Google Android 4.0 and can stream content from the Google Play Music, Movie, and TV stores as well as from YouTube.

You can control the device using your Android phone or tablet. The content streams over the internet, not from your device — so even if you don’t have the song or video downloaded to your Nexus Q or your phone or tablet to view them on your TV.

Any Android device connected to your WiFi network will be able to work with the Nexus Q, so if you have guests over they can use your Nexus Q to stream content from their library. All you have to do is turn on guest mode and they can use their phone or tablet to access their content.

The Nexus Q will ship in mid-July, and it’s the first device in the new [email protected] platform.

It certainly looks like an interesting new device… but at $299, the Nexus Q costs $100 more than a Nexus 7 tablet, which seems a bit expensive for a device that simply streams media.