Dell is launching two new ultraportable laptops. The 13 inch Dell Inspiron 13z will sell or $599 and up, while the Dell Inspiron 14z with a 14 inch screen will start at $699. Both thin and light notebooks will be available starting June 19th. 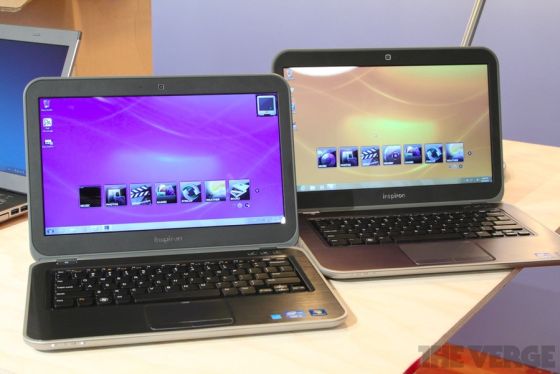 While the two laptops look an awful lot alike, the Inspiron 14z is technically an ultrabook while its smaller sibling is not.

That’s because the the 14 inch laptop features a 32GB solid state disk for caching as well as a 500 GB hard drive, while the Inspiron 13z has a hard drive only. That helps keep down the price, but it also means that the 13 inch laptop won’t be quite as responsive as its larger sibling.

Dell is also keeping prices relatively low by offering both laptops with a 1.4 GHz Intel Core i3 ULV Sandy Bridge processor — but you can upgrade to a faster Ivy Bridge CPU if you want to spend a little more money.

The Inspiron 13Z measures 13.1″ x 9.1″ x 0.8″ and weighs 3.8 pounds, while the Inspiron 14z is 4.1 pounds. Dell hasn’t share the dimensions for that model, but unsurprisingly it’s a bit larger. Dell uses the extra space to pack an optical disc drive into that model.

You can pop off the lid on the 13 inch model and replace it with a colorful cover.

The folks at The Verge and Laptop Magazine got a chance to check out the laptops. While The Verge wasn’t that impressed with the build quality or LCD display, the relatively low starting price is nice — especially since the first time we spotted the Dell Inspiron 14z ultrabook, it looked like prices could start as high as $1200.