Asus has announced that its first Android tablet with a 10 inch, 1920 x 1200 pixel display will be available the week of July 16th. For $499 you’ll be able to pick up an Asus Transformer Pad Infinity with 32GB of storage. A 64GB model will also be available for $599. 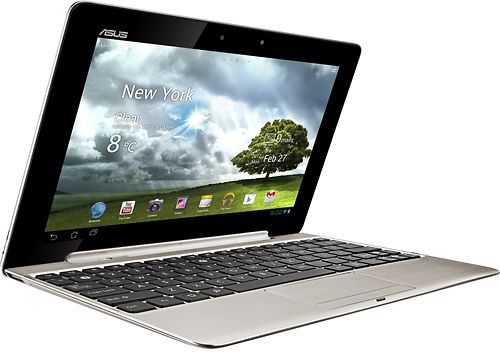 There are a few things that set the Transformer Pad Infinity apart from other Android tablets:

If you don’t need the slightly faster CPU or the extra screen resolution, Asus is also expected to drop the starting price of the Transformer Prime soon. Right now that tablet starts at $499.

With a starting price of $499 and an HD display, the new Transformer Pad Infinity will go head to head with the new Apple iPad which has a 9.7 inch, 2048 x 1536 pixel display.

The Asus tablet has a few things going for it. For instance, Asus offers a 32GB model for the same price as a 16GB iPad. The Transformer Pad Infinity also has more ports and expansion options than Apple’s tablet, and the optional keyboard dock lets you add even more ports and extend the device’s battery life.

On the other hand, Apple currently dominates the tablet space and there are far more tablet-friendly apps available for iOS than Android at the moment.

A number of sites have posted early reviews of the Transformer Pad Infinity, including Engadget, CNet, Droid Life, Android Central, and AnandTech. The tablet appears to get over 9 hours of battery life, take decent photos, and have a great-looking screen. But many folks still aren’t sold on Android as a tablet operating system.

If you’ve already decided you do like Android on tablets, the Infinity seems like a pretty nice piece of hardware for those that don’t mind spending a half a grand on a tablet. Bargain hunters may soon have another alternative though, as Asus and Google are expected to introduce a 7 inch Nexus tablet with an NVIDIA Tegra 3 quad-core processor for $199 and up.