The Asus Transformer Pad line of tablets are some of the most popular Android tablets on the market, thanks in part to the optional keyboard dock that Asus offers for those that want to turn their tablets into laptops. Now Asus is getting ready to launch a line of Windows tablets with a similar option. 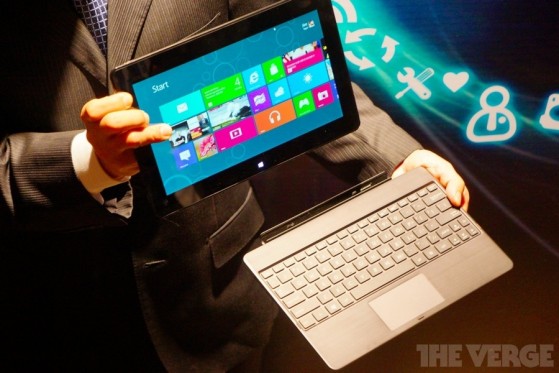 If it weren’t for 1366 x 768 pixel display and Windows 8/Windows RT software, it would be easy to confuse the tablet with the Asus Eee Pad Transformer Prime, which has awfully similar specs, but a 1280 x 800 pixel screen. Aww, who am I kidding? There’s really not much difference at all between those screen sizes, other than the fact that Microsoft insists on at least a 1366 x 768 pixel display for Metro-style apps.

Since the tablet has an ARM-based processor, it won’t be able to run millions of legacy apps designed for Windows computers with x86 chips. But there are a few hundred Windows 8 Metro apps available from the Windows Store for Windows 8 and Windows RT — and the operating systems aren’t even set to launch for a few more months. It’s too early to say whether Windows 8 will have an app store that can compete with those for iOS, Android, or even Windows Phone. But at least there will be some third party software available when the Asus Tablet 600 hits the street.

I haven’t seen any word on how much the tablet will cost.

The folks at The Verge and Netbook News have shared a few videos of the new 10.1 inch tablet.

2 replies on “Asus Tablet 600: Windows RT on a Transformer-like tablet”