Google handed developers about 6,000 Samsung Galaxy Nexus smartphones loaded with a pre-release build of Android 4.1 yesterday. But the official over-the-air update for all the folks that already bought Galaxy Nexus phones isn’t due out until mid-July.

If you can’t wait that long, some of the lucky folks who got their hands on the new developer phones from Google have already ripped the software and shared it with the community.

GSM Samsung Galaxy Nexus owners can grab the update straight from Google using a link from PTzero at the xda-developers forum. If you’re looking for something a little different, developer bigxie has released a version that’s been rooted, deodexed, and had busybox loaded.

You’ll need a rooted phone with an unlocked bootloader and a custom recovery such as ClockworkMod to install the update, and you’ll probably have to perform a complete wipe which means you may have to restore some data manually after upgrading to Android 4.1.

The process should be smoother once Google releases the official over-the-air update.

Meanwhile, RootzWiki forum member DroidVicious has posted a version of Android 4.1 that works on the Verizon version of the Galaxy Nexus.

While Google Android 4.1 isn’t officially available for devices other than the Galaxy Nexus yet, some developers have started porting the software to work on other phones. 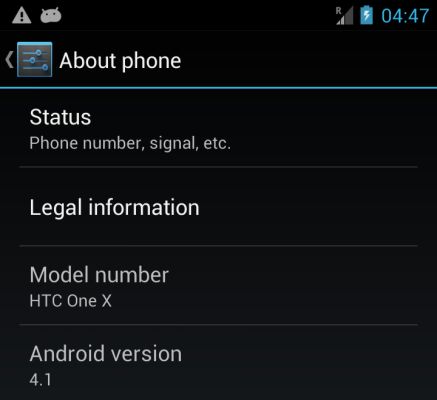 For instance, there’s an early build of Android 4.1 Jelly Bean available for the HTC One X, based on the Nexus One ROM. Not all the hardware works yet, so you should probably make a backup of your device using ClockworkMod, TWRP, or another recovery before flashing any of these ROMs.