AMD recently introduced its Brazos 2.0 platform, offering a couple of new notebook processors that offer moderate performance, low power consumption, and a low price tag.  HP recently loaned me a Pavilion dm1 notebook featuring one of the new processors — and while I’ll have a full review, I wanted to share some initial benchmark results. 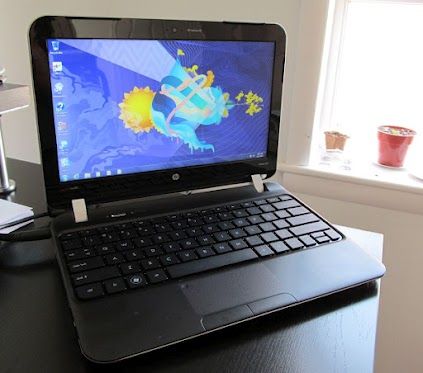 The Brazos 2.0 chips including the AMD E1-1200 and E2-1800 processors are a little faster than last year’s first generation Brazos processors, and much more powerful than the Intel Atom chips that you find in low cost netbooks.

They aren’t nearly as powerful as the Intel Core family processors you’ll find in ultrabooks, or even the new AMD Trinity chips designed for pricier laptops.

But the good news is that Brazos 2.0 CPUs are inexpensive enough to offer in ultraportable laptops that sell for as little as $400, while providing more than twice the performance you’d expect from a low cost netbook.

I ran a handful of CPU and graphics tests on the notebook to see how it compares with other laptops I’ve tested over the past few years.

Other models featured in the comparison charts include:

The tests include the 3DMark06 and Street Fighter IV benchmarks to test graphics and CPU performance, and a few tests I’ve been running for a few years to see how long it takes to transcode audio and video files or create a ZIP archive containing more than 2000 files. 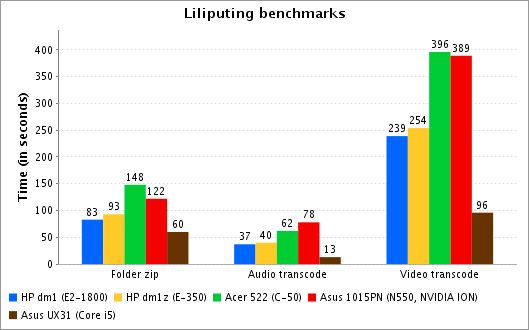 I was unable to run my video transcoding test on the Asus Eee PC X101CH, but I wanted to include a model with one of Intel’s most recent Atom chips, so here’s another chart showing results for the file zip and audio transcoding tests only. 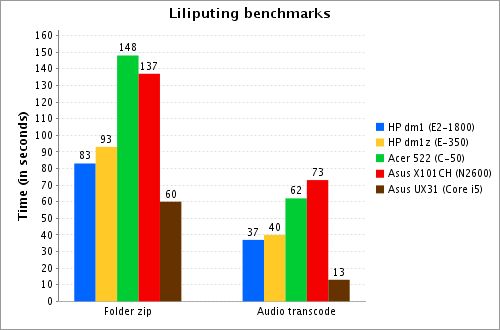 Long story short — the Brazos 2.0 version of the HP Pavilion dm1 scores higher than last year’s model with an E-350 processor in every single test — but there’s still no doubt that this is a budget processor, not a high-performance chip. 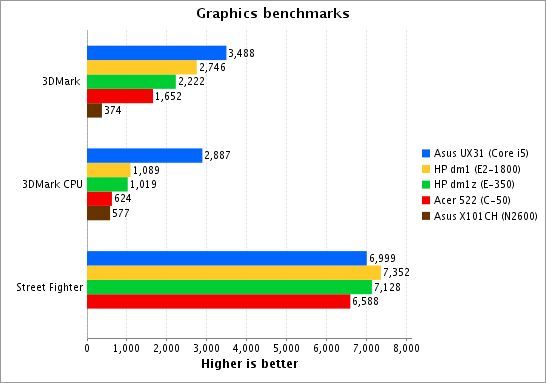 While the Asus UX31 ultrabook with a Sandy Bridge processor trounces the new Pavilion dm1 in every test of CPU performance, the HP notebook manages to hold its own in graphics tests. The Asus notebook came out ahead in the 3DMark benchmark, but the HP dm1 was the top notebook in the Street Fighter IV benchmark, managing close to 30 frames per second throughout the test.

Bear in mind, these benchmarks examine performance under very specific conditions. Real world performance can vary depending on the type of task you’re performing on a PC.

In my initial tests, I’ve found the new Pavilion dm1 to be generally pretty fast and responsive. The laptop had no problem streaming 1080p HD video from YouTube, and as the benchmark results show, it should be able to handle some light 3D gaming without too much trouble.

On the other hand, the HP Pavilion dm1 fan tends to be kind of noisy, and the 55Whr battery may be good for only around 5 hours of run time… despite HP’s claim that the laptop can run for up to 10 hours on a charge.

And while HD video from YouTube looks great, Netflix is another story. Standard definition videos play smoothly, but the HP Pavilion dm1 struggles with Netflix HD video. Image quality looks great, but the video playback is a little choppy and the audio and video are out of sync when streaming high definition videos from Netflix.

We’ll have more details in our upcoming review of the HP Pavilion dm1.