Remember UMPCs? Long before iPads and Android tablets were all the rage, Ultra Mobile PCs with Windows were supposed to be the next big thing. While these tiny computers did manage to collect a small but devoted following, they were typically underpowered, had awful battery life, and tended to carry high price tags.

These days most PC makers are putting their bets in Android tablets and upcoming Windows 8 tablets. But a few manufacturers are still cranking out devices that are best described as UMPCs.

The Tainell U-Touch 500 is one of them. It’s a full-fledged Windows 7 PC that you can slide into your (reasonably large) pocket. 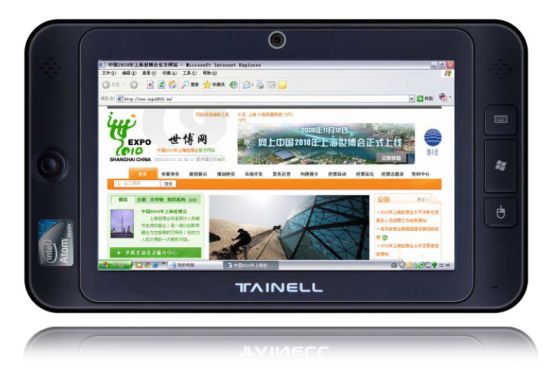 Dynamism has a pre-order page for the U-Touch 500, but there’s no pricing information yet. Instead you can sign up to receive updates via email.

It features 802.11b/g WiFi and Bluetooth 2.0 as well as WCDMA connectivity for mobile broadband. There’s a 1.3MP front-facing camera, a USB port, mini USB port, and headphone and mic jacks.

There’s some sort of mouse button on the left side of the screen and a few buttons on the right side for functions such as right-clicking or launching the start menu.

While I haven’t seen a battery life estimate yet, the 4 cell 2400mAh battery sounds kind of small. I’m not sure I’d expect more than a few hours of run time. But that’s the price you pay for packing this much computer into this small a package.

This isn’t the first time Tainell has released a mini-PC in this form factor. The Chinese device maker introduced the T500 a few years ago — but that model had a 1.1 GHz Intel Atom Z510 processor and Windows XP operating system.