When Samsung unveiled the Samsung Galaxy Note 10.1 tablet in February the company said it would have a 1.4 GHz dual core processor. But that was then. Now it looks like the company may be giving the 10 inch tablet a bit of a spec bump before launch.

Nordic Hardware spotted some benchmark results that suggest the tablet will ship with a 1.5 GHz Samsung Exynos quad-core processor and Mali-604T graphics. 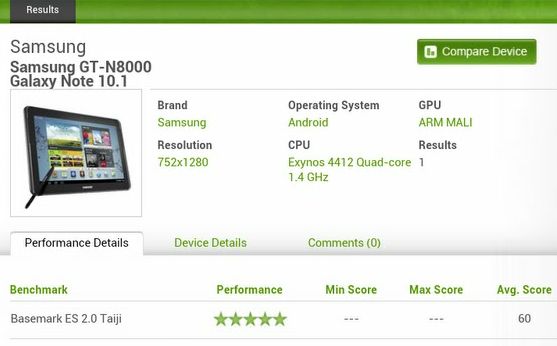 This confirms a rumor reported by Netbook News last month.

If these results are accurate, the upcoming Galaxy Note 10.1 could be one of the fastest Android tablets on the market. By comparison, I ran the same benchmark on the Samsung Galaxy Tab 2 (7.0) tablet which features a 1 GHz TI OMAP 4430 dual core processor and PowerVR SGX540 graphics  and got a result of 10.72… about 1/6th the score of the 10 inch Galaxy Note.

A quad-core processor wouldn’t be the only thing to set the Galaxy Note 10.1 apart from the competition. It also includes an active digitizer and digital pen for writing or drawing on the screen, as well as a series of S Pen apps which are designed to work with the pen.

Update: German site TechFokus got a Samsung official to acknowledge that the upcoming tablet will have an Exynos Quad processor.