Samsung hasn’t said much about that little PC designed to run Chrome OS that we saw at CES in January. But a product listing for the Samsung Chromebox showed up briefly at retailer TigerDirect’s web site today.

The page has been pulled, but the folks at Engadget snapped a picture and captured some video. 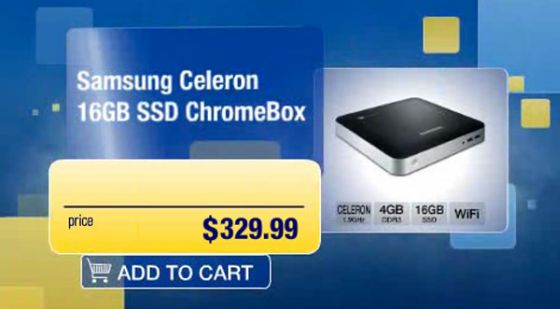 If the listing is accurate, it looks like the Chromebox will be powered by a 1.9 GHz Intel Celeron B840 dual core processor. It will have 4GB of DDR3 memory, a 16GB solid state disk, and 6 USB ports.

TigerDirect expects to sell the Chromebox for $329.99.

Like a Chromebook, a Chromebox is designed to run Google’s web browser-based Chrome OS. It’s an operating system that boots quickly and stores most of your important data in the cloud, letting you quickly and easily switch between computers while picking up where you let off on the last one.

The first Chromebooks to hit the streets had the same 16GB of storage, but they were hampered by slower Intel Atom N570 dual core processors and 2GB of RAM. While you might not think you need much more than that to run a web browser, the truth is that Chromebooks like the Samsung Series 5 start to feel awfully sluggish once you open more than a few browser tabs.

While Celeron processors aren’t exactly top-of-the-line, they generally offer much better performance than Intel’s Atom chips, so I’ll be curious to see how the upcoming Chromebox handles Google’s operating system.