While it’s a pretty impressive device for $35, one thing it can’t do is run Windows 7. That’s partly because Microsoft doesn’t offer a version of Windows 7 for ARM-based chips, and partly because even if it did, I doubt the operating system would run very well on the hardware.

But here’s what you can do with a Raspberry Pi — fire up a Linux-based operating system and then use remote desktop software to login to a remote Windows PC or virtualized Windows desktop.

VirtualBigBANGTheory has posted a video of a Raspberry Pi doing just that.

Basically what you’re watching is the computer booting up a Linux environment and then logging into a Windows 7 virtual desktop based on Citrix XenDesktop software.

The Raspberry Pi doesn’t have to be fast enough to handle the Windows operating system and Windows apps, because they’re actually running on a remote server. But it is fast enough to provide a decent remote desktop solution letting you run Windows applications on a $35 PC (assuming you have access to pricier hardware and software that’s running Windows. 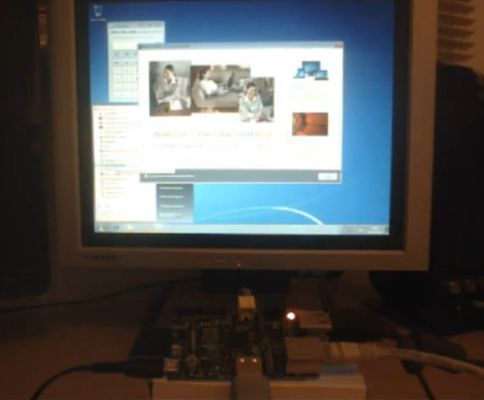 Here’s why this is cool: Imagine you have a school, business, or other enterprise where you’d like to be able to deploy dozens or even hundreds of Windows computers, but you might not have the money to pay for that kind of hardware or to maintain and support that many devices.

You can just order a few hundred Raspberry Pi computers for $35 each and invest in a few high-end servers capable of running dozens of virtual machines and then pony up some cash for your Windows licenses. Now you can use the Raspberry Pi devices as inexpensive thin client computers that can access software running on your servers.

Of course you’ll still need to pay for monitors, keyboards, mice, and other peripherals. But it’s not hard to imagine a situation where this solution could be cheaper than buying and maintaining dozens of individual computers at normal market rates.