It’s kind of amazing how many of us walk around with portable, internet-connected computers in our pockets. But there’s one major problem with modern smartphones: They get horrible battery life.

Up until a few years ago I carried around a tiny Nokia candybar-shaped phone that made calls and did little else. I only had to charge it every few days. My Google Nexus One, on the other hand, is lucky if it can get through a workday on a charge.

Massachusetts-based Lilliputian Systems Inc has a solution (and a rather clever name, if you ask me): a pocket-sized fuel cell which holds enough power to fully charge an iPhone about 10-14 times. 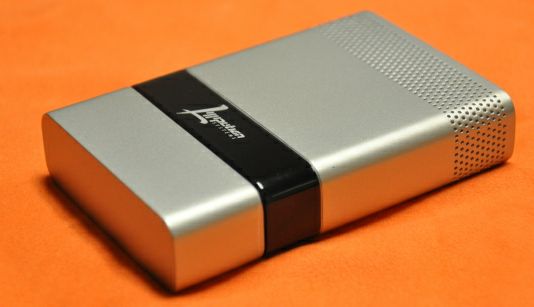 Lilliputian Systems is partnering with retailer Brookstone to sell the portable charger in stores later this year. It will have the Brookstone name on it, like many of the products which the company sells, but does not necessarily produce in-house.

The portable charger will work with most devices that can be charged via a USB cable. That includes mobile phones, digital media players, cameras, and other devices.

There are already a number of chargers on the market which let you charge mobile devices with standard batteries. What sets this charger apart is the use of a recyclable fuel cell cartridge.

It lasts longer than single-use AA batteries and Lilliputian Systems says its system will be cheaper than buying a spare battery for your phone. Although final pricing for the charger hasn’t been disclosed yet, CNET reports that the plastic cartridges will hold butane and cost a few dollars.

The cartridges are also approved for carry-on use on airplanes, which is a good thing because the only place I ever see Brookstone stores is at airports. Oh yeah, and I guess it also means your phone won’t die while you’re playing games or watching videos on that next international flight.

While the charger looks like an interesting alternative to existing solutions, the thing that I’m most impressed with is that someone is finally bringing a practical, affordable fuel cell to market in the US. Fuel cell technology has been under development for years, but you can’t exactly pick them up at the drug store next to the AA and 9-volt batteries yet.