The NOOK Tablet is a 7 inch tablet with a 1024 x 600 pixel display, a 1 GHz TI OMAP4 dual core processor, and a custom version of Google Android 2.3 designed by Barnes & Noble. But users have been running alternative versions of Android such as CyanogenMod 7 (Android 2.3) and CyanogenMod 9 (Android 3.0) on the tablet for months.

While CyanogenMod 7 for the NOOK Tablet is pretty stable at this point, if you want to run Android 4.0 things are a little rougher around the edges. Netflix video playback isn’t supported, and users are regularly experiencing “sleep of death” problems where the tablet fails to come back to life when you press the power button unless you perform a full reboot.

But if you’re looking to stay on the bleeding edge, there are now unofficial nightly builds of CyanogenMod 9 available for the NOOK Tablet. Note that only the model with 1GB of RAM and 16GB of storage is currently supported. 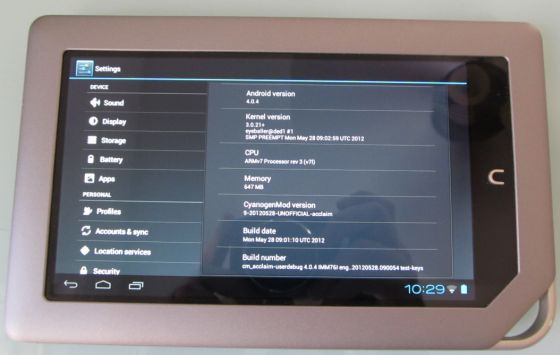 A developer that goes by the name of eyeballer has set up a server to compile a new build of CM9 for the NOOK Tablet every day. Each new version will incorporate the latest upstream changes from the CyanogenMod development team as well as device and kernel-specific changes for the NOOK Tablet.

Eyeballer’s builds also include GooManager, a utility that makes it easy to update the operating system using a custom recovery tool called TWRP.

Keep in mind — this is all experimental. Builds aren’t necessarily tested before they’re released, so there’s always a chance that features which worked yesterday will not work in today’s build. The nightlies are also base on the experimental 3.0 kernel for the NOOK Tablet — which doesn’t work with the 8GB NOOK Tablet yet. That’s why you shouldn’t try installing these CyanogenMod builds on anything but a 16GB NOOK Tablet.

You can find instructions for installing the nightly builds at the xda-developers forum. First you’ll probably need to root your NOOK Tablet in order to install the Google Play Store or other method for installing GooManager. If you already have a rooted NOOK Tablet with ClockworkMod Recovery or TWRP installed, you should also be able to download and install CM9 nightlies from the links provided at xda-developers.

If you’re looking for a slightly more stable version of CM9 for the NOOK Tablet, you can try chrmhoffman’s version, which is based on the 2.6.35 kernel.