Asus is preparing to introduce its latest crop of devices at the Computex trade show next week. Today the company posted a few videos that don’t show off any new products… but they do give us an idea of what to expect.

One video is simply titled “when two sides unite” and it shows two sides of one poster board with Tai written on one side and Chi on the other… when you spin the board fast enough it read Tai Chi.

The second video is a little more informative. It says “all0in-one is no longer in one,” and shows drops of water pooling together — and then two drops pulling apart. One has a Windows logo in the center, while the other has an Android logo.

Long story short: Don’t be surprised if Asus introduces a new tablet which can run both Windows and Android.

Update: It looks like Asus is partnering with BlueStacks to offer support for Android apps on all Asus computers, including the millions of PCs that are already out there.

This wouldn’t be the first tablet to offer that type of functionality. ViewSonic has offered a 10 inch tablet with an Intel Atom processor and support for Windows and Android since last year. 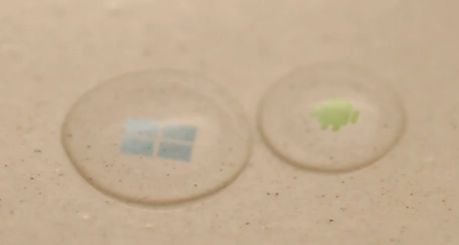 What’s not clear is whether the new Asus tablet would be a dual-boot machine that lets you choose your operating system at startup, or a solution more like ViewSonic’s where you could run Android apps from a Windows environment using BlueStacks software or something similar.

It’s also not clear whether this will be a computer with an x86 chip. Up until recently if you wanted to run Windows you needed an x86 (or x64) processor. But Windows 8 will come in an ARM-friendly version called Windows RT which device makers will be able to preload on tablets and other devices.

If I was a betting man, I’d put my money on an x86 chip, because I don’t know if Microsoft will take kindly to PC makers loading Windows RT and Android on the same computers. But we should know soon enough. Asus is holding its Computex 2012 press conference on June 4th.

Of course there’s another possibility: Asus might just offer two similar tablets. One would be available with Windows 8 while the other runs Android.

5 replies on “Next Asus tablet may run Android *and* Windows”