The Raspberry Pi is a small, low power, inexpensive computer that sells for just $35. It’s not exactly a speed demon, and the system board ships without any sort of protective casing. But the little computer which is aimed at educators and hobbyists provides everything you need to run Debian, Fedora, or other open source Linux-based software.

You can use the system to power a media center, control a robot, surf the web, or write programs. But if you’re intrigued by the idea of a $35 computer, yet unsure of how to get started… there’s a magazine for that. 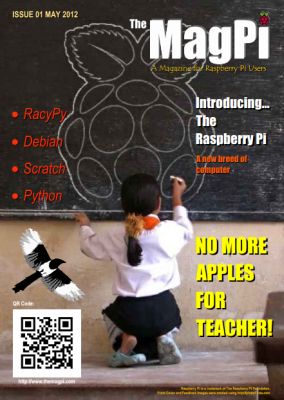 MagPi is a new magazine created by members of the RaspBerry Pi enthusiast community. It’s not officially affiliated with the Raspberry Pi foundation, and was instead put together by a group of volunteers.

The first issue of MagPi was released online a few days ago. You can read it online or download a PDF version of the magazine.

In the first issue you’ll find an introduction to the Raspberry Pi project along with some background information about the device. There’s also an introduction to Linux-based operating systems, ways you can try out Linux on your computer even before you get your hands on a Raspberry Pi (this part is clearly aimed at people with little to no experience with open source operating systems), and some basic tips for programming in Python.

The magazine also highlights a project to create a robot with an arm and claw that can be used to perform simple tasks. The robot uses a Raspberry Pi computer as its brains.

MagPi isn’t exactly going to rival People, Time, or Newsweek at the newstand anytime soon. It’s aimed at a very specific niche. But if you’re interested in learning more about the Raspberry Pi before ordering one, or looking for new things to do with one you’ve already purchased, it’s a great way to get started.