HP is adding a new line of thin and light notebook with an all-metal case to its lineup today. It comes in two versions that look exactly the same. The only differences are under the hood. 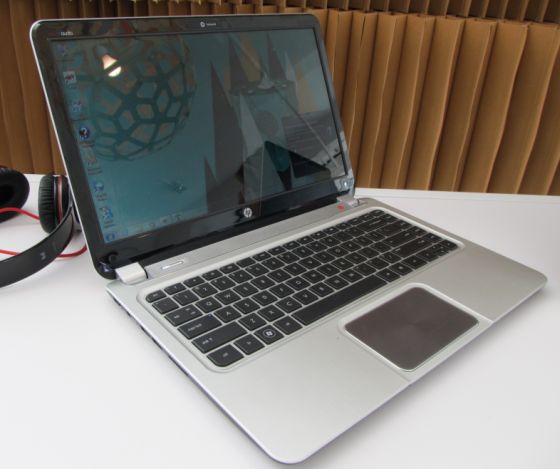 You can pick up the HP Envy 4T ultrabook today for $700 and up. The Sleekbook model with an AMD processor should be available soon.

If you’re wondering why the AMD version isn’t called an ultrabook, it’s because Intel trademarked that term and sets guidelines for what qualifies as an ultrabook. Not surprisingly, if a laptop doesn’t have a solid state disk, it’s not an ultrabook.

The good news is that if you get the ultrabook model you get either a solid state disk or 32GB of solid state cache combined with a 500GB or larger hard drive. That, combined with Intel’s hardware and software, allows the computer to boot quickly and resume from sleep in as little as 2 seconds.

HP says the 4 pound laptop gets up to 8 hours of battery life using the built-in battery. That’s a good thing, because the battery is not user replaceable.

The company offers premium options including Intel Wireless Display technology, a backlit keyboard, and discrete graphics. The notebook also has full-sized ports including an Ethernet jack with a special door that allows you to plug in a full-sized Ethernet cable without ruining the slim porfile of the computer which measures just 0.78 inches thick.

Unfortunately one option that’s not available is a high resolution display. The HP Envy 4 Sleekbook and Ultrabook both come with 1366 x 768 pixel glossy screens. I also detected a bit more flex in the keyboard than I would have expected from a premium notebook — but with a starting price of $700, I’m not sure if all ultrabook or sleekbooks really are premium models anymore. It might be best to describe them as thin and reasonably light laptops with some premium features.

The laptop is available with in either a black and red or black and silver design.