Taiwanese computer maker Gigabyte plans to unveil what it’s calling the “lightest Notebook on earth” next week in advance of the the Computex trade show.

What we don’t know yet is whether Gigabyte will have to blast all of the current thin and light terrestrial notebooks into space to accomplish that goal… or at least ignore the existence of netbooks (which last time I checked are just small, cheap notebooks). 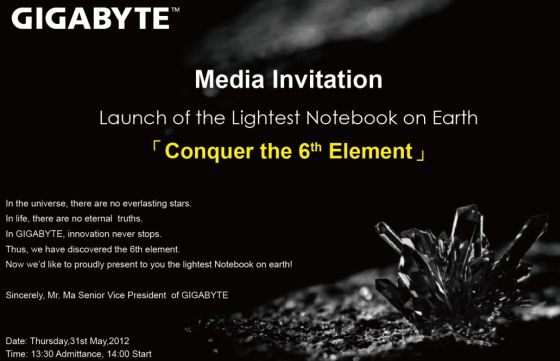 Either way, Gigabyte is known for making computers with decent build quality and performance. But the company isn’t exactly known for producing svelte products — so it should be interesting to see what Gigabyte has up its sleeve.

The only two things we really know right now are that the new laptop will be called the Gigabyte X11, and that companies that promise their product will be the “thinnest,” “lightest,” or “fastest” often don’t bother with a lot of fact-checking before making those superlative claims.

As Ultrabook News points out, if the Gigabyte X11 is really going to be the lightest notebook on earth it will probably have to weigh less than the 2 pound Asus Eee PC X101 netbook or the 2.17 pound Mouse Luvbook X ultrabook.

That means there probably won’t be room for a large screen or a beefy battery. In fact, that’s probably true even if the Gigabyte X11 isn’t truly the lightest notebook on the planet. But given Gigabyte’s habit of packing in more features than some of its competitors (the first Gigabyte netbooks served double duty as convertible tablet-style computers), I’m holding out hope for removable batteries or other features you don’t often find in ultrabooks.