Dropbox is on online storage service that lets you synchronize files between computers and access them on the go on mobile devices. Most users get 2GB of free space to start, but you can get up to 18GB through bonuses from referring friends, or even more space if you pay for it.

But there’s another way to get more space — sign up for a second account. The problem is you can usually only use one account at a time on your Windows PC. But Freeware Genius has a tutorial on how you can run two Dropbox instances on the same PC.

This lets you either use two of your own accounts to double your space, or allow two Dropbox users in your household to login at the same time — which is the slightly less shady reason to try this. 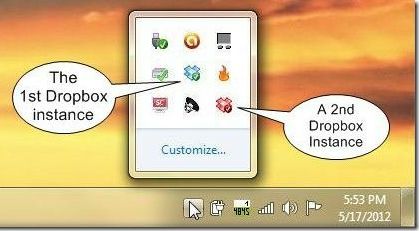 Here’s how it works. Basically you go ahead and install the Dropbox app like you normally would on your computer.

Then you download DropboxPortableAHK — a portable version of Dropbox. It’s designed to let you run Dropbox from a USB flash drive so you can use it on any computer.

But another advantage of DropboxPortableAHK is that it’s entirely self contained — which means you can run it on a computer that’s already running Dropbox.

DropboxPortableAHK the program will walk you through the process of setting up a sandboxed version of Dropbox that doesn’t write anything to your registry or program files directory. You can either put it on a flash drive, or a folder on your PC.

When you’re done you can basically run Dropbox twice on the same computer to log into two different accounts.

You can find more details on the process at Freeware Genius or at the DropboxPortableAHK page.

5 replies on “Double your storage: You can run two Dropbox instances on one PC”