Computers designed for gaming tend to be big, heavy, and generally a pain to lug around. Notebooks with 11.6 inch displays, on the other hand, are typically aimed at folks that prioritize mobility over graphics performance. They tend to be thin, light, and easy to stuff in a bag.

There hasn’t been a whole lot of overlap between these two computer categories. The Alienware M11x is probably the best known example — but Dell recently announced plans to phase out that laptop.

But PC maker Clevo is stepping up to fill in the gap with the Clevo W110ER, which is sold under a few different brand names. It’s a notebook with an 11.6 inch, 1366 x 768 pixel display, an Intel Ivy Bridge processor, and NVIDIA GeFroce GT650M graphics. It supports up to 16GB of memory. 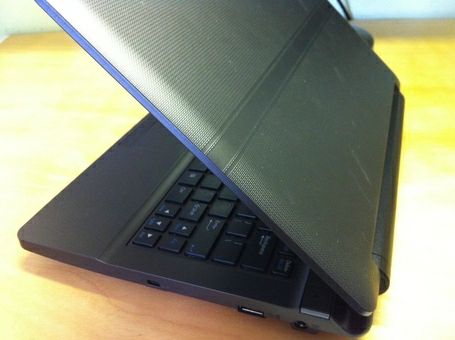 A member of The Verge Forums has posted one of the first reviews of a Clevo W110ER-based notebook. According to Frogger40’s review, the notebook has good build quality, a lot of ports, and pretty good performance for playing most modern video games — although some will require you to lower the graphics quality.

Paired with an optional solid state disk, the computer boots very quickly and performs a lot like a typical ultrabook — although it’s tough to compare the W110ER with a 3 pound ultrabook when this gaming laptop weighs 4.5 pounds.

But (aside from the weight) there’s one major problem with the laptop — it reportedly gets lousy battery life. For general computing tasks Frogger40 says he got less than 4 hours of run time. While playing video games, he got just over an hour.

If you’re looking for a reasonably small laptop for gaming on the go — and don’t plan to spend a lot of time away from the power outlets, computers like the Origin EON 11-S and Maingear Pulse 11 which are based on this laptop design might be an interesting alternative to a typical ultrabook.

On the other hand, if you’re looking for something that’s as thin and light as an ultrabook, or which offers similar battery life… it sounds like this isn’t it.