The Cisco Cius is a 7 inch Android tablet with an Intel Atom processor aimed at enterprise customers. The Cius was never marketed as a consumer device, and it includes business-friendly features such as the ability for corporate IT folks to set up their own app stores or enable remote desktop solutions.

You can even use the Cius as a video phone by plugging it into a telephone docking station.

But nearly two years after introducing the Cius, Cisco is pretty much canceling the device. 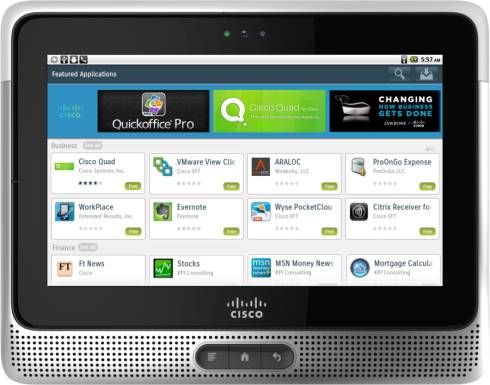 In a blog post Cisco’s OJ Winge says the company “will no longer invest” in the platform or make “further enhancements… beyond what’s available today.” Customers who are satisfied with what the Cius can currently offer may still be able to pick one up, but clearly the tablet isn’t going to be a big focus for the company moving forward.

But Cisco isn’t exactly getting out of the mobile tablet space. The company’s just going to be focusing on software rather than hardware.

Cisco already offers communications, remote desktop, and other business applications for iOS, Android, and other platforms and will continue to do so… supporting, among other things, employees that would rather bring their own devices to work than use a Cius tablet.

Oh, and did we mention that Cisco used to charge about $750 for a Cius tablet? I’m sure that probably played a role in businesses deciding to look elsewhere for their hardware needs. There are plenty of perfectly good tablets on the market for less than half the price.

via Ars Tehnica and PC World