The Raspberry Pi is a tiny, low power computer that sells for just $35. At that price you don’t get an awful lot. There’s no case for the PC. The 700 MHz ARM-based CPU isn’t that speedy. And while there are HDMI, USB, and Ethernet ports, that’s about it… for now.

But the Raspberry Pi team is working on peripherals that can add functionality to the little computer. One of the first will be a camera, and there’s now a working prototype. 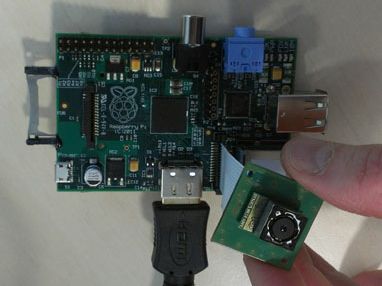 The team have posted the first photo taken by the camera prototype on their blog. The camera connects to the pins left exposed in the center of the Raspberry Pi system board.

While the prototype uses a 14MP camera, the finished product will probably be built around a lower resolution camera in an effort to keep the price low. There’s no word on how much the camera add-on will cost when it’s released.

Of course, there’s also nothing stopping you from just connecting and off-the-shelf webcam to the USB port… but where’s the fun in that  much less geeky solution?

The official Raspberry Pi camera add-on will also use the computer’s graphics processor to handle video processing, which should help improve performance.