The Asus PadFone is an Android smartphone with a 4.3 inch display, a Qualcomm Snapdragon dual core processor, and a whole slew of optional accessories — including a tablet dock that converts the phone into a 10 inch tablet, and a keyboard dock that transforms it into an Android laptop.

You can’t find the PadFone in the US yet, but the folks at Netbook News picked one up in Taiwan and they’ve posted one of the lengthiest unboxing videos you’ll ever see — because it involves unboxing and testing the phone and all the available docking stations and accessories.

The idea behind the PadFone is that you don’t need to synchronize your data between devices — because the phone acts as the brains of the system whether you’re using it as a handset, tablet, or laptop.

You can also extend the battery life with every dock you plug in. The tablet dock is called the PadFone Station, and it includes its own battery. The laptop dock has another battery too.

Netbook News also picked up an optional stylus which functions as a Bluetooth handset, allowing you to write or draw on the tablet — and to make voice calls even while the phone is docked in tablet mode. You just hold the Bluetooth 4.0 stylus up to your ear like a tiny, thin phone. 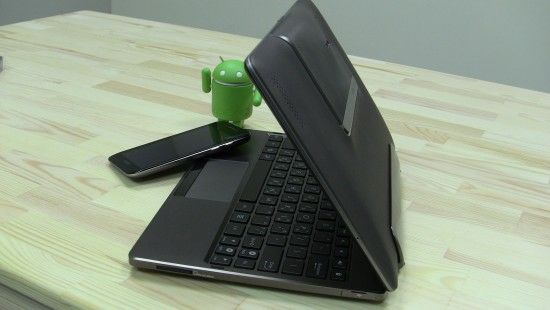 The phone itself has a 960 x 540 pixel display, Adreno 225 graphics, 16GB of storage, an 8MP rear camera and a VGA front-facing camera. It runs Android 4.0 and has room for a microSD card slot, an HDMI port, and a removable battery.

When docked, the tablet seems nearly indistinguishable from any other 10 inch Android tablet. It has a 1280 x 800 pixel display and seems quite responsive in the Netbook News video.

There’s also a section in the Apps menu which displays apps that are only available for tablets and which may not work when you’re using the phone on its own.

Add the keyboard dock and the whole thing works like an Asus Eee Pad Transformer tablet — although it’s noticeably thicker than the Asus Transformer Prime tablet due to the Padfone’s pudgier plastic case.