Google and Oracle are duking it out in court over the question of whether Google had the rights to use Java as a basis for the Android operating system. Meanwhile the developers at Xamarin have shown that Android doesn’t need to run on Java at all.

They’ve taken the source code for Android and modified it so that instead of running on a Dalvik Java virtual machine, it uses a virtual machine based on Mono, the open source implementation of C#.

The results? Xamarin ran a series of benchmarks and found that Android actually runs faster on C# than it does on Java. 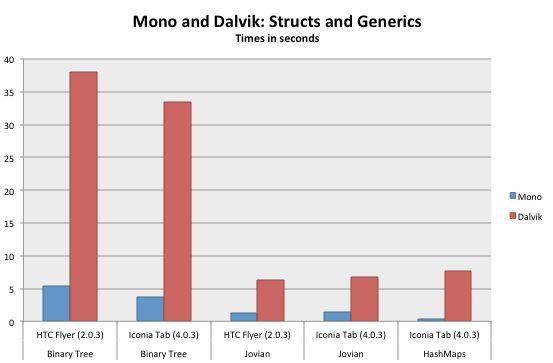 Xamarin has released the source code for their new version of Android. They call it XobotOS, and it’s available on github.

I wouldn’t hold my breathe waiting for Google to drop Java or for handset or tablet makers to adopt XobotOS. The developers created the operating system mostly to see if they could. While they expect to use some of the things they learned in future software projects, they don’t plan to continue developing XobotOS.

Since the source code is available I wouldn’t be surprised if we start to see hackers and hobbyists try to get it up and running on existing Android hardware.

But I suspect that some apps written for Android would fail to run on XobotOS unless they were rewritten to run on C#.

6 replies on “Android without Java: Xamarin ports Google’s OS to run on C#”