Tin Can Tools has released a new kit that lets you add a Pixel Qi sunlight readable display to a BeagleBoard or PandaBoard system. Both are tiny computer systems aimed at hobbyists interested in building anything from digital signage to robots with the palm-sized computer as the brains.

The Tin Can Tools kit includes a Pixel Qi display and all the extra bits you need in order to connect it to one of these little boards including an Animal LVDS Mini Board, an adapter board, and cables. 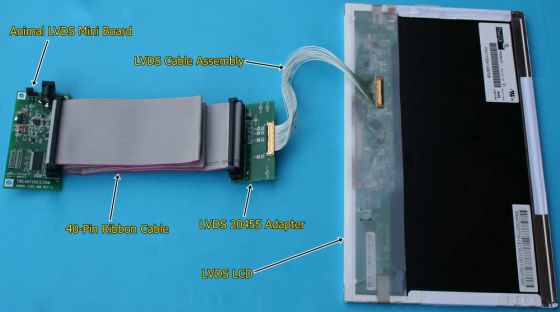 The kit includes a 10.1 inch, 1024 x 600 pixel Pixel Qi LCD display which can be used as a full color screen or as a high contrast black and white, sunlight viewable display when used without a backlight.

The Tin Can Tools kit doesn’t come cheap. It will set you back $299. But that’s actually not too bad when you consider two things:

In other words, the Pixel Qi screen can be yours for just a $100 more than the price of a standard LCD connection kit. Or if you don’t need all the extra cables and accessories I suppose you could save $25 and just buy the screen on its own.

Either way, Pixel Qi displays aren’t produced in large enough quantities to compete with standard LCD screens on price — which is part of the reason you don’t see the company’s screens in many mainstream laptops or tablets. But now there’s a new way for hobbyists looking to build their own devices… as long as they’re willing to pay a little extra for the Pixel Qi technology.