The Lava Xolo X900 is the first smartphone to ship with an Intel Atom processor. The Xolo X900 is available in India for about $420, and the Android handset features a low power 1.3 GHz Intel Atom Z2460 system-on-a-chip.

The phone is based on an Intel reference design, and upcoming phones from Orange and Lenovo are expected to look very similar.

AnandTech has posted a detailed review of the Xolo X900, and while it’s not necessarily the best Android smartphone money can buy, it’s apparently a competent performer with decent battery life — showing that Intel has figured out how to make its x86 chips competitive with the low power ARM-based processors found in most smartphones and many tablets. 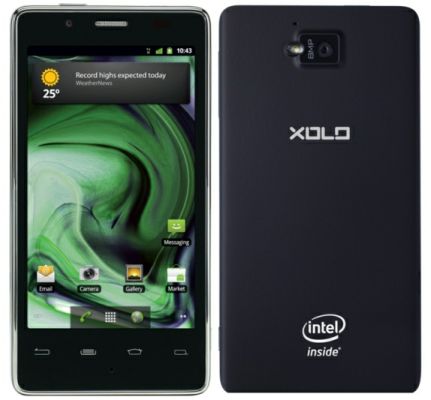 The phone has a 4 inch, 1024 x 600 pixel display, 1 GB of RAM, 16GB of storage, and a 5 Whr battery. It features PowerVR  SGX 540 graphics clocked at 400 MHz. It’s similar in size and weight to leading Android phones from companies including Samsung, Motorola, and HTC.

While the phone didn’t come out top in many benchmarks, it did best every other handset in AnandTech’s browser-based tests. It also came out near the top in many general performance tests, and near the middle of the pack in graphics benchmarks.

Probably the most interesting thing is that the Xolo X900 is a middle-of-the-road device when it comes to battery life. Like most modern smartphones, if you want to surf the for days on end without recharging, you’re out of luck. But the phone didn’t exactly embarrass  Intel in AnandTech’s battery life tests involving web browsing over WiFi or 3G, talk time, or use as a WiFi Hotspot.

Intel-based Android phones to still face some challenges. Apps written using the Android NDK (Native Developers Kit) won’t run on x86 architecture unless they’re ported. The vast majority of Android apps will work, but AnandTech reports that Flash Player 10.3 runs but Flash 11 does not. Netflix also fails to run properly on the phone.

Still, it looks like Intel is ready to challenge ARM’s dominance in the smartphone space with its new low power chips.