TWRP is a utility that you can use to create a complete backup of an Android phone or tablet, install software updates, wipe cache, or make other system-level changes.

It’s a custom recovery tool, much like the popular ClockworkMod Recovery. And like ClockworkMod, you’ll need a rooted phone or tablet with an unlocked bootloader to use TWRP.

But unlike most recovery tools, TWRP is designed to support touchscreen input. This makes navigation easier on touchscreen phones and tablets — and it’s pretty much a must-have feature for tablets such as the Amazon Kindle Fire which have only one physical button.

The TWRP team has released version 2.1, adding new features and making the recovery tool even easier to use. 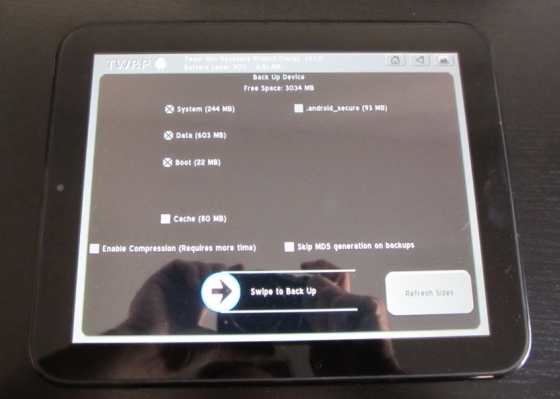 The TWRP 2.1 home screen looks a lot like the TWRP 2.0 home screen. But once you start digging into the menus you’ll see a number of new features. For instance, there’s a new slider control for many actions, so you have to swipe to backup, swipe to wipe cache, etc. This should make it tougher to accidentally execute an action.

There’s a basic file manager that lets you copy, move, delete, or change permissions for any file. It’s still a pretty barebones file manager. You can’t rename a directory, for instance. But it does let you perform a few basic tasks without rebooting into Android first.

The backup menu also now shows the size of each partition you’re backing up.

One of the biggest changes is a scripting engine called OpenRecoveryScript. This lets an app send instructions to your device to be performed during startup. In other words, you can choose to wipe your cache, backup your device, or install a software update using an Android app, and your phone or tablet can automatically reboot and perform that action.

The first app to use OpeRecoveryScript is GooManager Beta, and you can even use it to install TWRP 2.1 on most officially supported devices — although I found that the install failed on my HP TouchPad. I had to manually install TWRP 2.1 by downloading the zip file and using ClockworkMod Recovery to install the zip.

OpenRecoveryScript also works with ClockworkMod Recovery, and the TWRP team has submitted the code to CyanogenMod, so it might be included in future versions of the popular custom ROM.