Toshiba plans to launch 3 new Android tablets in the next few months, featuring 7.7 inch, 10 inch, and 13 inch displays. The Toshiba Excite 10 will be the most affordable of the bunch, with a starting price of $449.99. 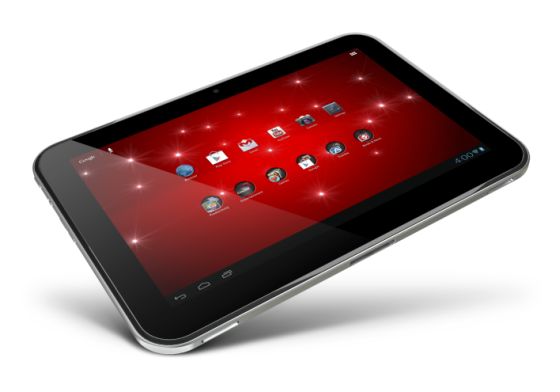 Toshiba introduced the Excite 10 LE earlier this year, but apparently the LE stands for Limited Edition, and the company expects the Excite 10 to be more of a mainstream product.

It looks a lot like the Excite 10 LE, with a similar thin and light case design. The emphasize on size and weight sets all of Toshiba’s new Excite tablets apart from last year’s Thrive tablets which had chunkier designs. The 10 inch Thrive also had full-sized USB and HDMI ports as well as a removable battery. None of the new tablets have those features.

But the Toshiba Excite 10 does have a full-sized SD card slot. That’s something you won’t find on many tablets, and it should make it easy to pop a memory card out of your camera or laptop and into your tablet.

Other ports include micro USB and HDMI ports and a docking station port.

The tablet has a 2MP front-facing camera and a 5MP rear camera. It measures 0.4  inches thick and weighs about 1.3 pounds. Toshiba says it should get up to 10 hours of battery life.

All three of Toshiba’s new tablets will feature the standard Google Android 4.0 software experience, complete with access to the Google Play Store. But Toshiba also loads its tablets with custom apps including a Toshiba media player and file manager.