Chinese chip maker Rockchip is starting to show off its latest RK3066 ARM Cortex-A9 dual core processor, as well as a number of the tablets and set-top boxes that will use the new chip. But the RK3066 is just one of the new processors the company plans to bring to market this year.

In the second quarter of 2012, Rockchip plans to launch a low power, single core ARM Cortex-A9 chip called the RK31xx. 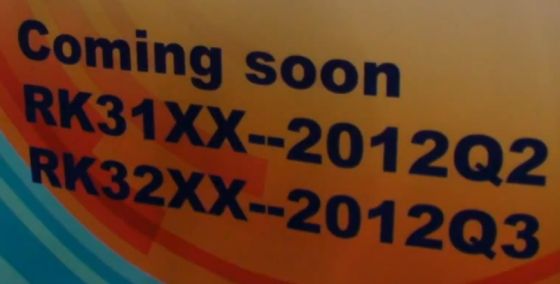 Rockchip isn’t offering any additional details about those upcoming processors, but the company’s chips generally find their way into low cost products from Chinese devices makers.

That doesn’t mean these tablets are necessarily low quality. Rockchip is working with Google to receive Android certification for its processors so that Android tablets with Rockchip processors can include the Google Play Store and other Google applications.

But Rockchip-based products generally tend to be more affordable than products with the lastest chips from Qualcomm, Texas Instruments, or NVIDIA.

One reply on “Rockchip RK32xx quad-core chip coming in 2012”