Lenovo is introducing a new set of software optimizations for Windows computers that the company says will allow a PC to boot more quickly. Lenovo says the average PC with its new Lenovo Enhanced Experience 3 (EE3) software boots in just 24 seconds.

That’s for a PC with a traditional spinning disk hard drive, not a solid state disk. 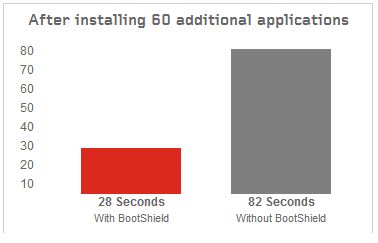 Lenovo says that’s about 40 percent faster than a typical Windows 7 PC — but the performance gap gets even wider after you install dozens of Windows applications.

That’s thanks to a system called BootShield for notebooks which prevents certain software that would normally load during boot from launching until resources are available.

The EE3 system includes a number of other components. Lenovo’s RapidBoot software defragments the parts of the hard disk used to load Windows. Lenovo has tweaked drivers for its PCs, and the BIOS on supported systems has been optimized to enhance boot speeds.

Some Windows 7 services are also left unloaded until after the boot process is complete.

Lenovo has been offering its Enhanced Experience software for a while, but while EE2 included enhancements meant specifically for computers with solid state disks, the third generation takes aim at hard drives and offers average boot times about 5 seconds faster.

BootShield is also new in EE3.

The Lenovo IdeaPad U310 and U410 ultrabooks will be two of the first products to feature EE3 boot speed optimizations. But other IdeaPad, ThinkPad, and ThinkPad Edge products will also use the new software.