Most major PC makers have released ultrabooks over the past few months, and many more of the thin and light laptops are expected in the coming year. But while they’re thinner and lighter than typical notebooks and much more powerful than an average netbook, there’s at least one thing that still makes ultrabooks a tough sell: price.

The least expensive ultrabooks available today run $799 and up, and most models have starting prices closer to $1000.

Chip maker Intel created the ultrabook platform, and the company would like to see that base price fall to $699 soon… and one of the tools they’re hoping PC makers use is plastic. 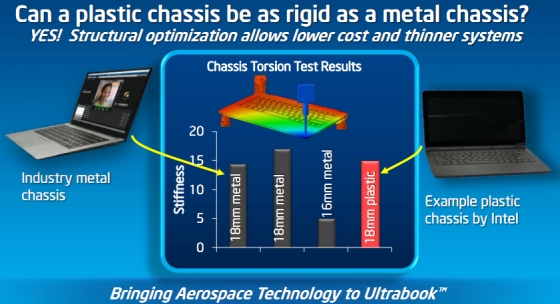 Most ultrabooks on the market today have sturdy metal cases. That’s because PC makers have to use a very sturdy material if they want to make laptops with cases that are less than 0.7 inches thick. Otherwise they’ll simply break.

According to Intel, metal cases are typically between 7 and 10 times stiffer than plastic. But it’s also a more expensive building material.

So Intel has developed ways to optimize the structure of plastic, allowing PC makers to create thin plastic laptop cases that are just about as strong as cases made of metal.

But metal cases aren’t just sturdier than plastic ones… they also look nice. After all, Intel is pushing ultrabooks as something as a premium offering. You don’t want a “premium” notebook that looks like that $300 model on sale at the local big box electronics store, do you?

Intel has an answer for that too: stamped aluminum hybrid cases. Basically you could end up with an ultrabook with a cheap plastic case and a thin aluminum sheet on top giving the laptop a metallic finish.

So yeah… that’s pretty much what some of the next-generation cheap ultrabooks could be like. Cheap refrigerators that are painted to look like they’re made of metal.

It might not sound all that good, but if it keeps your backpack light while giving you a solid computing performance, do you really care?