Apple calls the displays on its iPhone, iPod touch, and iPad “retina” displays because they have so many pixels packed so tightly that it’s impossible for the human eye to tell one pixel from another while holding the device a comfortable distance away from your face.

Android tablet makers are expected to step up their game soon, with Acer, Asus, and Lenovo bringing 10.1 inch tablets to market with 1920 x 1200 pixel displays.

But laptop screens are another story. In fact, 1366 x 768 pixel displays have only just become more common than 1024 x 768 pixel screens. But Intel envisions a day when laptop displays will offer the same retina-style pixel densities as phone and tablets… and that day could arrive as soon as next year. 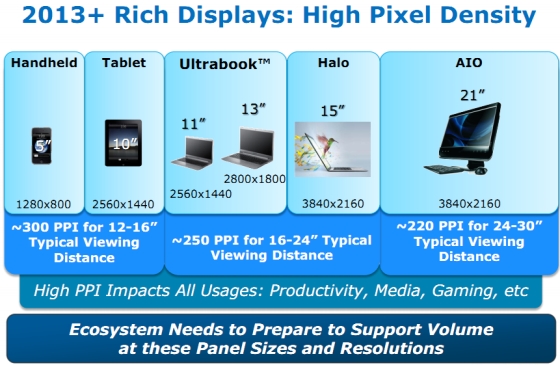 The further you position a screen from your eyes, the lower the pixel density needs to be for it to qualify as a retina-style display. But today’s 1366 x 768 pixel displays simply don’t cut it.

So here’s what Intel sees happening in the computer space over the next few years:

You may have noticed that all of these resolutions, with the exception of the 5 inch form factor, offer a higher resolution experience than a top-of-the-line 1080p HDTV with a measly 1920 x 1080 pixels.

The difference is that you sit as far as 10 feet away from your HDTV, while a laptop probably sits 2 feet or less from your eyeballs.

Part of what will make these new higher resolution displays possible are changes in the way Windows and other operating systems handle pixel density. While Windows 7 and earlier operating systems have allowed users to change some DPI (dots per inch) settings, for the most part things look messy when you do that, with some fonts and graphics rendering larger than others.

And if you don’t adjust your DPI settings (as well as the sizes of scrollbars, toolbars, and other items) then text and pictures may be too tiny to read on small, high resolution screens.

This isn’t as much a problem in iOS or Google Android because the operating systems are designed to resize graphic elements so they simply look better on high resolution screens, not smaller. Windows 8 will be able to do something similar — at least with apps using the new Metro style user interface. It’s not yet clear how desktop-style apps will look on a super-sharp 3840 x 2160 pixel display.

While it’s possible that we could start to see new laptops and desktop computers with these high resolution displays, my guess is that they won’t flood the market immediately. 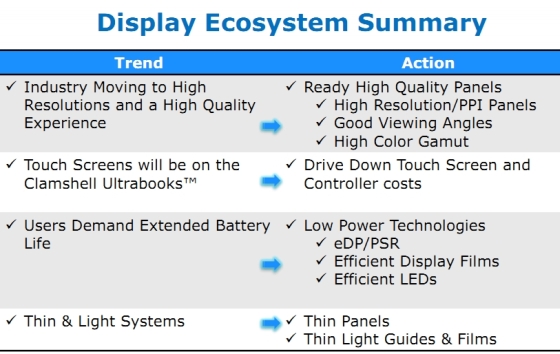 Until supply and demand increase sufficiently, high resolution displays will still cost a heck of a lot more than the 1366 x 768 pixel displays that seem to be everywhere today… and it took a long time for that resolution to finally become more popular than older 1024 x 768 pixel screens. Retina displays might remain the exception rather than the rule for years to come.