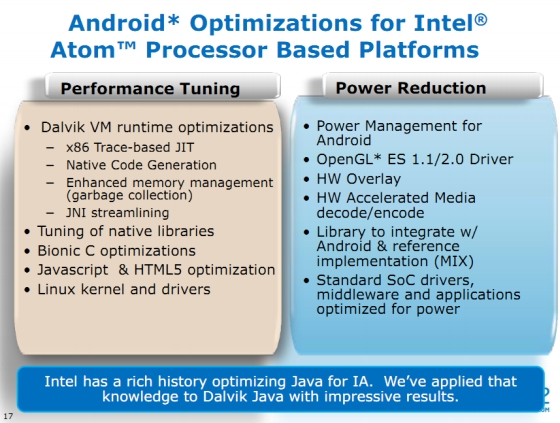 There aren’t a lot of surprises in the presentation, but Intel has been working with Google to optimize Android to run on x86 hardware for the past year or two. The latest Android emulator for Windows, Mac, and Linux allows developers to emulate an x86 processor while testing apps.

Intel points out that most Android apps can already run on Atom hardware without any modifications, but there are also tools available to port apps written in “native code” so they can also support x86 architecture.

Most importantly, Intel’s latest chips offer performance that’s on par with the fastest ARM-based processors, while consuming far less power than early Atom processors. This makes them viable choices for smartphones and tablets that don’t have space for enormous batteries.

Lenovo has already started showing off phones and tablets based on Intel’s new low power Medfield chips, but they have yet to hit the market.