One of the things that makes an ultrabook an ultrabook is the solid state drive. By using an SSD instead of a hard drive PC makers can make thin and light laptops that are more durable, offer faster data transfer speeds, and consume less electricity than models with hard drives.

But SSDs don’t come cheap, and they’re one of the reasons ultrabooks tend to cost more than traditional notebooks. Some PC makers have decided to split the difference by offering cheaper ultrabooks with large hard drives and small solid state disks which enable quick boot times and faster Windows performance. 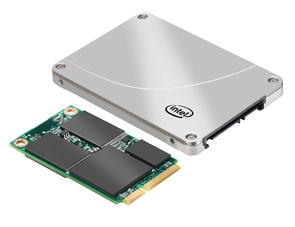 Now Intel is offering new, faster versions of its small solid state disks designed for use alongside hard drives. They’re optimized for ultrabooks but they can also be used in desktop or larger notebook computers.

Intel’s older 311 Series solid state disks had top read speeds of 200MB/s and write speeds of 105MB/s and were only available in 20GB capacities.

Ultimately, you’d probably be hard pressed to notice much difference. Both the 311 and 313 should offer better performance than you’d get from a hard drive alone.

In fact, with your operating system and core applications stored on the SSD instead of a hard drive, a computer with both an SSD and a HDD can run perform many tasks without spinning the hard drive at all, thus giving you longer battery life.