Intel unveiled 13 new processors as part of its third generation Core family lineup today. The new processors should be about 20 percent faster than their predecessors while using 20 percent less energy — but the biggest change will be in the improved graphics.

The new chips are designed to support DirectX 11 graphics, HD video encoding and decoding, and Intel says you should even be able to play many of the latest 3D video games without a separate graphics card — although NVIDIA thinks there’s still a place for its mobile graphics processor. 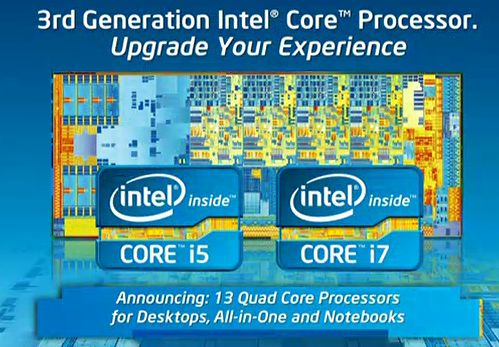 Intel is replacing its 95W desktop chips with 77W processors. The company also unveiled a single notebook processor today, which has a TDP of 35W. That’s still a lot more power than a typical ultrabook, netbook, or tablet will use. But it should help high-end notebooks get slightly better battery life.

Third generation Core family chips are the processors that we’ve been referring to as “Ivy Bridge” chips up until now. That’s the code name Intel has been using — but you won’t see the Ivy Bridge label on any PCs at stores.

Instead, you’ll want to look for the number 3 in the chip name. That notebook chip, for instance, is called the Core i7-3612QM. Older Sandy Bridge chips have names like Core i7-2xxx.

Intel is also bringing some of the features we’ve seen in the company’s ultrabook chips to all of its third generation Core chips. For instance you’ll see the Intel Rapid Start technology for quick booting and quick resume from sleep, Smart Connect for connecting to the internet periodically to download email messages, instant messages, and social network data even when the PC is sleeping.