This weekend the folks that first brought Android 4.0 to the Barnes & Noble NOOK Tablet released Alpha 0.02, this time with Android 4.0.4. 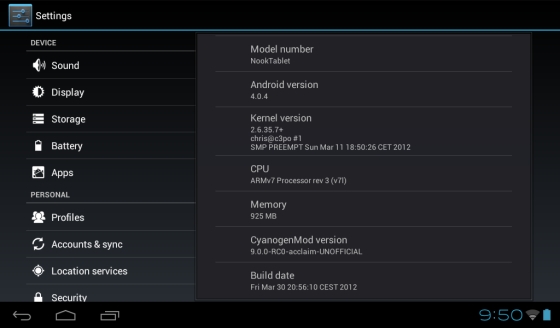 The update doesn’t look like much right now. It includes the new CyanogenMod boot logo and a bug fix that allows the Google Chrome beta web browser to be installed.

I also found that when I updated from Alpha 0.01 to the latest Alpha I had to flash the Google Apps package from the CyanogenMod Wiki again. Until I did that I was unable to use the Google Play Store, Gmail app, or other Google applications on the tablet.

In case it’s not incredibly clear, installing CyanogenMod 9 on the NOOK Tablet can void your warranty, so don’t expect any support from Barnes & Noble if something goes wrong. This is also an early experimental build based on the CyanogenMod team’s work, so don’t expect everything to work properly — Netflix and YouTube HD video playback, for instance, still aren’t supported in Alpha 0.02.

If you’ve already installed an earlier beta of CyanogenMod 7 or CyanogenMod 7, you can flash the latest build using ClockworkMod Recovery using the following steps:

Backup your device: Optional (but recommended):

You can follow the same steps from the “install the update” section to install the gApps package.

If this is your first time installing any version of CyanogenMod 9 on the NOOK Tablet, you’ll want to root your tablet (using an SD card or by connecting the tablet to your PC and running a root tool on your computer), install ClockworkMod Recovery, and then use ClockworkMod to install CM9 using the steps above.

You can find more details and tips at the xda-developers forum.

4 replies on “Android 4.0.4 comes to the NOOK Tablet (unofficially)”