There’s a time-tested ritual with PC owners. After a few months or years the performance starts to deteriorate and you pull out a Windows install disc and spend a full day re-installing the operating system and re-installing all of your apps.

So-called “PC rot” isn’t as bad on Windows 7 as it was with earlier versions of the operating system. Odds are if your system is getting sluggish over time it has more to do with hardware or some of the apps you’ve installed than the OS itself.

Still, Microsoft’s next version of Windows will make re-installing or “refreshing” the operating system easier and faster than ever. 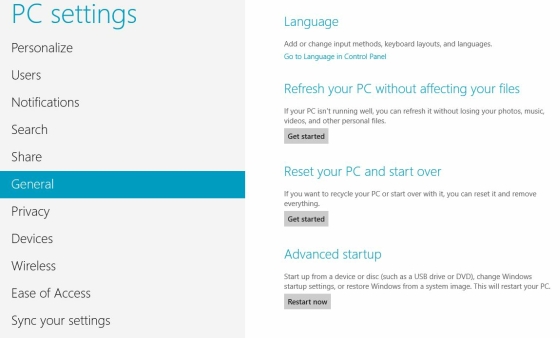 All you have to do is scroll to the bottom of the “General” area in the Windows 8 settings and choose the appropriate action.

A system refresh basically re-installs Windows 8 without removing your files or data. Some of your apps will even remain intact.

If things have really gone south though, you can choose the “reset your PC and start over” option to remove all data on your computer and basically restore it to factory conditions.

Either way, the process is designed to run much more quickly than an old-fashioned Windows install using a disc.

This is a feature that some PC makers have been offering on notebook and desktop computers by setting aside protected partitions on the hard drive with a system restore image. But now it’s built right into the operating system.

In other words, it should be just about as easy to reset a Windows 8 tablet or laptop to a blank slate condition as it is to wipe your data from a mobile phone.

via MSDN and Laptop Magazine

19 replies on “Windows 8 features a reset button: Re-install Windows without a disc”