This morning the latest iPad hit the streets. This afternoon iOS hacker MuscleNerd has posted the first pictures showing a third generation iPad after it’s been jailbroken. 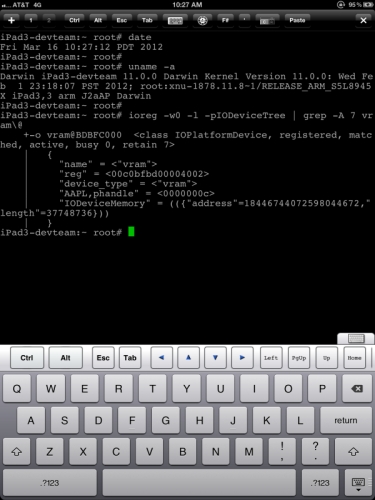 He hasn’t yet made any tools available for download and doesn’t know how long it will take to whip the tools into shape so that they can be distributed. But this is confirmation that there’s at least one security hole in the new iPad’s software which can be used to gain root access to the device.

Update: Make that three… Hacker i0n1c has performed an untethered jailbreak on his new iPad, which means that it can be rebooted without connecting to a computer and re-running the jailbreak software.

Meanwhile, chpwn and phoenixdev have successfully rooted the tablet using a third method.

Jailbreaking an iOS device allows you to access files and settings that would otherwise be hidden. This makes it possible to install apps that aren’t available from the official App Store, and most jailbreak utilities install the Cydia Store which is basically a one-stop shop for apps and patches for jailbroken iPhone, iPod touch, and iPad devices.

There you can find apps that change the default behavior of the tablet by altering the boot logo, notification system, multitasking, or other features.

The new iPad runs iOS 5.1 software and features an Apple A5x processor. It’s a lot like last year’s iPad 2, which explains why it hasn’t taken long for experts to figure out a way to circumvent the device’s security.

Apple will probably patch the security hole eventually, so if you’re hoping to jailbreak a new iPad, it’s probably a good idea to avoid any optional updates from Apple until the new tools for jailbreaking the device are released to the public.

One reply on “The 2012 iPad has been jailbroken”