The two Sony tablets available today ship with NVIDIA Tegra 2 dual-core processors. But it looks like Sony’s next tablet could have a Tegra 3 quad-core chip. 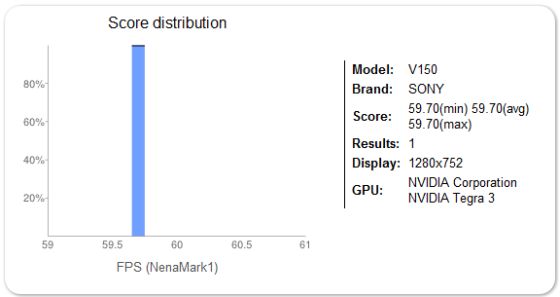 The tablet appears to have a 1.4 GHz Tegra 3 processor and a 1280 x 752 pixel display. It runs Android 4.0.3 software and gets a respectable score in the NenaMark graphics benchmark, handling nearly 60 frames per second.

Sony has taken an unusual approach toward the Android tablet space so far. The company’s first model, the Sony Tablet S featured a unique wedge-shaped design and a 9.4 inch display, while the follow-up Sony Tablet P is a dual-screen tablet which has two 5.5 inch, 1024 x 480 pixel displays that can show two side-by-side apps or one app across both screens.

There’s no information about the size, shape, or other features for the new V150. It’s not even clear if it’s an actual product or just a prototype someone is testing. But the NenaMark score could provide a clue as to what from Sony’s next tablet.