The Novero Solana is a tablet and a netbook that runs Windows and Android. As portable computers go, it’s a jack of at least a few trades — but that versatility doesn’t come cheap. The Solana is expected to go on sale in the US soon for $799. It will run €699 in Europe. 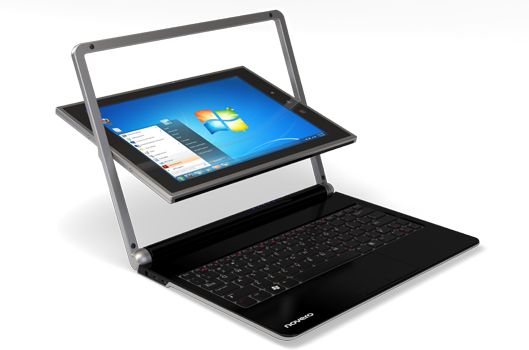 That’s how much Engadget reports the Solana will sell for when it launches within the next few months.

While that’s not a ridiculous amount of money for a convertible tablet-style notebook, the Solana isn’t exactly a speed demon. It’s powered by an Intel Atom N2600 Cedar Trail processor which is an inexpensive chip that prioritizes low power consumption and long battery life over performance.

Most netbooks with Cedar Trail chips are expected to sell for less than half the price of the Solana.

That said, most of those netbooks are just small laptops designed to run Windows 7 Starter.

Novero’s computer, on the other hand, can run Windows 7 or Google Android. I suspect it will also handle Windows 8 reasonably well thanks to its 9.7 inch, 1024 x 768 pixel touchscreen display which is the minimum resolution required to run full-screen Metro style apps in Windows 8 or download apps from the Windows Store.

I got to spend a few minutes with the Solana at the Consumer Electronics Show in January. At the time I wasn’t aware that it ran Android in addition to Windows, but I was impressed by the computer’s attractive design.

Most convertible notebooks have a swivel instead of a hinge connecting the display to the base. This lets you twist the screen around before folding it down over the keyboard for use in tablet mode.

But the Novero Solana uses a less common (although not entirely unique) design that puts a frame around the display so that you can push back the screen so it faces outward and then close the laptop lid like you normally would, but with the screen facing away from the keyboard.

I’m not sure there are any functional benefits to the design, and it actually might make the computer a little wider than other netbooks with similarly sized displays. But it sure is pretty.